That’s what I say to the demons when they try to stir me away from something new that I want to do, something that seems a bit risky, a bit challenging, something that requires big changes, a shifting of priorities.

That usually does the trick.

They feel re-assured, thinking that this might be one of those times when my dream, my project is going to fall flat on its face.

It happened so many times before.

They retreat where they belong, in the (not so) depths of my unconscious, ready to interfere at the first sign of rebellion, at the next threat to the status quo.

That’s what they do, that’s their job, keeping things as they are, nice and safe.

The thing is that I know myself quite well too. I’ve learned to work with my limits, knowing where I can push a bit extra to achieve what I want, and when it’s not even worth trying.

The secret is to keep doing what I want to do without much fuss, not attracting their attention.

Nothing to see here, just me playing around.

And when they do finally notice that something has indeed changed, it’s too late, I’m already there.

At that point there’s nothing they can do about it. 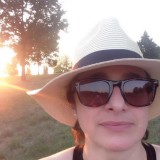