That’s what I say to the demons when they try to stir me away from something new that I want to do, something that seems a bit risky, a bit challenging, something that requires big changes, a shifting of priorities.

That usually does the trick.

They feel re-assured, thinking that this might be one of those times when my dream, my project is going to fall flat on its face.

It happened so many times before.

They retreat where they belong, in the (not so) depths of my unconscious, ready to interfere at the first sign of rebellion, at the next threat to the status quo.

That’s what they do, that’s their job, keeping things as they are, nice and safe.

The thing is that I know myself quite well too. I’ve learned to work with my limits, knowing where I can push a bit extra to achieve what I want, and when it’s not even worth trying.

The secret is to keep doing what I want to do without much fuss, not attracting their attention.

Nothing to see here, just me playing around.

And when they do finally notice that something has indeed changed, it’s too late, I’m already there.

At that point there’s nothing they can do about it.

I’ve just moved to a new place, and at the corner of my street there’s a “mysterious house”. Mysterious to me at least.

Through the windows, inside, I can see yellowed, rotting lace curtains, both on the ground and the first floor. I’ve never seen the lights on, in those rooms at night, but the house is actually inhabited in other parts.

The building is not decaying in itself, but those rooms…those mysterious old rooms left as they were…are becoming a little obsession.

I’m totally enthralled by it.

I would like to go inside to look at the details, learn it’s story and take pictures. I dream of walking at its front door, ring the bell and ask, beg whoever lives there, to let me in, to let me see the place.

But it’s unlikely I’ll ever do that.

That made me think of the visual power of decadence and decay and the importance it always had in my work.

Since childhood I have always been fascinated by images of abandoned, declining structures. Not ruins as such – I was born in Rome and there’s plenty of those there!

I’m more interested in post-industrial remains, glories of a recent past, still around to haunt us.

I found them fascinating and unsettling at the same time.

Recently I came across the beautiful images from a photographic book “The ruins of Detroit” by french photographers Yves Marchand and Romain Meffre.

With stunning images, taken during the course of a five years collaboration, they have been documenting the rise and fall of the city of Detroit, as a major industrial capital of the XXth century.

I advice you to visit their website and see the images in a larger size and in their full glory.

Like I said, fascinating and unsettling at the same time.

I’m setting up some changeable installations on my studio walls, putting together little paintings, prints and cards.

Here are the first two. 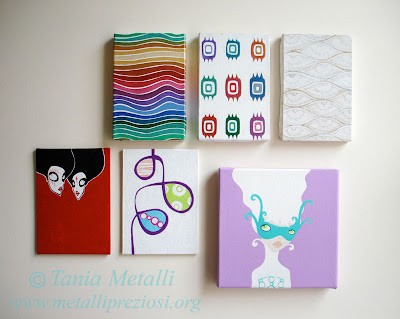 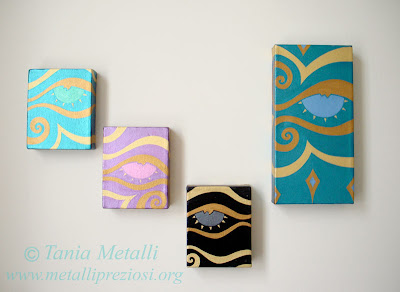